I’m watching the wounded dove we rescued walk tight circles at my feet. A piece of dried grass stuck to her right foot is agitating her, but she doesn’t stop to remove it. Instead, she keeps tracing the same radius, occasionally shuffle stepping like a wind-up toy.

When I found her, the neighborhood cat had taken her left eye, and I was sure a wing had been broken the way she held her body stiff with pain. Scooping her into a shoebox, I kept watch over her while I worked.  The way she was moving and writhing her neck I was sure I was witnessing the decent of death upon her tiny, bird body, and I would have to leave the room. Clearly, my mode of reaction is “flight” when I sense danger.

In the morning, it wasn’t until after finishing my first cup of coffee that I built up enough courage to see if she was still alive in her makeshift nest. Her neck was still making Exorcist-like contortions, but she was fighting to live. I mean, literally, she was trying to get the hell out of that box and the shitty newspaper articles that lined its edges.

My husband, the bird-whisperer, carried her outside and hour-by-hour it seemed she was making a recovery. 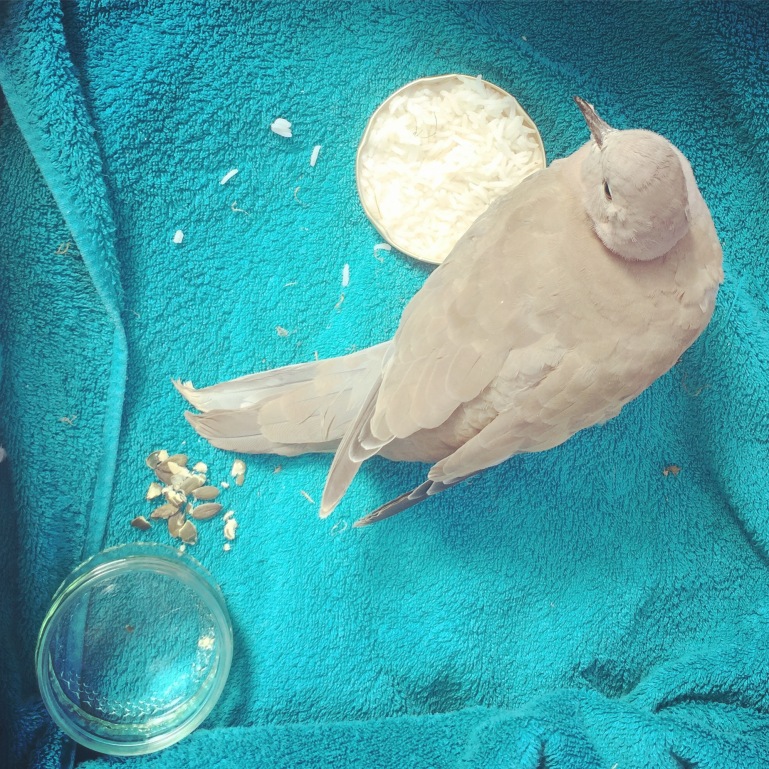 I spent a lot of time sitting on the steps that second day, watching the dove I had named “Audrey” regain strength and sort out her neck. And because it can get a bit dull watching a bird waddle around, I also spent a lot of time observing the trees and the network of ivy and brambles along the brick wall. I willed the ripening apples to drop from our trees, and watched the pigeons’ loud attempts to mate and fight. And when Audrey unexpectedly threw herself into the air and onto a high branch of the Hawthorn tree, it was a bittersweet lesson in thriving or, at the very least, surviving the challenges of daily life.

Even in an ordinary English garden (i.e. “yard” for us Americans) we can find sources of inspiration, courage and resilience.

Seek Out the Sunlight 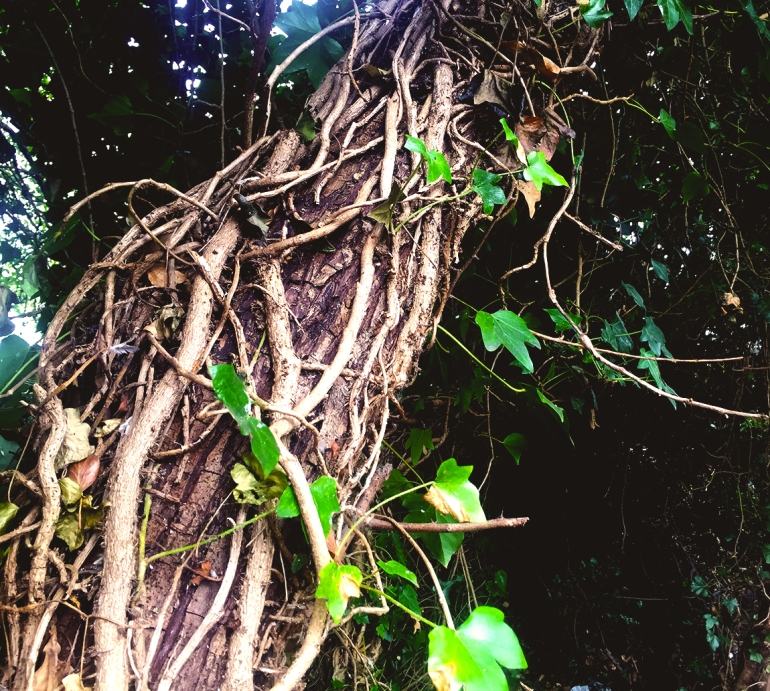 Brambles, elder, ivy, even rogue branches from a neighbor’s sycamore tree will do whatever is needed to seek out the light and open spaces to survive. While I don’t condone the brambles’ overbearing approach, or the ivy’s strangle-hold method to gain space and sunshine, I do admire the plants’ resilience and commitment to growth.

In our ongoing work to be our best selves, the brambles offer a lesson in moving toward spaciousness both in a physical sense, but also where we can find clarity. There’s no shortage of articles offering advice on setting boundaries on checking emails, social media detoxes and the benefits of meditation. Having time to focus, and then surrender, is vital to our health.

If you’re like me and Vitamin D levels make or break your sense of well-being, seeking out the sunlight is a literal necessity. Equally critical is the need to seek out positive nourishment physically, mentally, emotionally and spiritually. The importance of finding healthy places where we can thrive can’t be underestimated in our daily lives.

Two oak trees stand in solidarity at the corner of our back garden. When we moved into our home, there were so many brambles we didn’t even know they were there until we cleared out the tangle of thorny vines.

They had been overtaken by ivy with vines so big I mistook a few for the tree’s upper branches. It had been years since these oaks and their gnarled trunks had been exposed to the sun and (mostly) rain in their Cambridgeshire habitat. I felt a pang of anger as I cut away the overgrowth. How could these beautiful trees been forgotten for so long? Was it too late to revive them?

But like so many other plants and patches of grass I observed, their resilience was humbling. Their deep roots gave enough strength and nourishment to live, but they’ve also been boosted by a few hours of attention with gardening shears. For most of us though, the challenge isn’t in the offering of support but in the asking for help, for a moment to let go of a facade of a “stiff upper lip” and be honest in our struggles.

When we are rooted in our purpose and sense of self, we can find incredible reserves of strength in challenging times. Sometimes, though, that’s not enough.

There is a gift in showing vulnerability; it’s how relationships are solidified and bonds are formed. By seeking out helpful networks we are gifting ourselves a greater chance to succeed, and creating community in the process. If we want to cut out a bit of the sappiness, we could look at this process for what it is: a functioning ecosystem. When we collaborate with a meaningful community, we all benefit.

Launch When The Time is Right, Not Necessarily when it Feels Comfortable

When Audrey thrust herself into the air the first time, she hovered like a faulty drone and then accelerated into the branches at the far end of the garden, crash-landing near a pile of cat shit. Stunned, she let herself be carried back to her towel-lined box to recover without a struggle.

I was both ecstatic that her wing wasn’t broken, but concerned the timing was too soon. She needed a few more days to recover. Although we could offer security, we had no idea about what to feed her and birds don’t belong in cages. I had to give her some credit. Audrey had a chance to launch and she did, even if the outcome wasn’t a success.

On the second attempt, a few hours later, she managed to clumsily land in the nearby tree, where it was clear she was exhausted. But she was staring down at me from a perch she preferred and I suppose that was the point.

This was a lesson that hit particularly close to home. When the timing is right to make the most of an opportunity and/or to make a personal change, we better believe it won’t be comfortable. I’m guilty of wanting to have all the possible scenarios outlined, the answers understood and a feeling that I’m absolutely ready and prepared before I start really committing to pursuing a goal.

And that’s why it’s taken me over 15 years to go after a career as a writer.

We might fall a few times, but when opportunity strikes, we owe it to ourselves to throw ourselves in the air and go for it. Even if we don’t land on the branch we intended, and we fumble about, at least we’ve moved closer to the goal.

While Audrey stumbled around our patio plotting her departure, I was eyeing the collection of apples bunched on our trees’ outer limbs. Visions of apple pies and crumbles danced in my wannabe homesteader’s head.

The problem was that most of the fruit was out of reach, and I’m not spritely enough to climb a tree, even ones with valuable rewards. There were, however, plenty of apples scattered on the ground. It was my landlord who pointed out that even the bruised ones were still good to use, and so began my morning ritual of picking out the least bruised and worm-eaten Cox and Bramley apples I could find.

Yes, they were beat up and hardly still-life painting material, but they made a wonderful apple crumble. An hour’s soak in salt and vinegar removed any critters, and the apples tasted no different to the overpriced, blemish-free ones I bought at the store.

The lesson we can hold close to our heart is that no matter how many personal “flaws” or “blemishes” we can obsess over, it doesn’t define us as a whole. Mistakes may have been made, and/or (gasp) failures. It’s easier to focus on the bruises and worm-holes of our perceived identity, deciding we aren’t good enough, or prepared enough, or worthy of happiness rather than celebrate our potential.

But what if we focused instead on the fruit in between the bruises and blemishes? What if we turned our attention to the gifts we can give despite the setbacks, mistakes and failures? As human potential pioneer George Leonard said in his 9 Principles for Leonard Energy Training: “Develop your talents, make them public and be willing to play the fool. Take appropriate risks and don’t hoard yourself.”

His words are a powerful reminder that we have an obligation to show up each day, flaws and all, to create something positive.

It’s easier said than done, but day-after-day we have to make time to honor and nurture our potential. No use throwing out the entire apple because of a few bruises, especially when a perfectly good apple pie could be made and enjoyed.

These subtle and not-so-subtle lessons of how we can thrive aren’t mind-blowing in their insight, but that’s not the point. Each second we are choosing where we direct our attention, what information we are processing and how we will show up in the world, and what gives me hope is that we already have the wisdom and intuition to know what me need to be healthy and fulfilled.

We don’t need to rely on a constant stream of content telling us how to be better. If we pay attention, gentle reminders can be found in the trees, the birds and even in the thorns of our immediate environment. All we have to do is sit still long enough to notice.