A thin layer of sticky snow blanketed the ground, but not enough to make the green tips of grass disappear. It is the first snowfall of the winter season here in Ely, England and I was anxious to walk along the River Ouse to see the transformed landscape.

The circuitous walking route from my home meets up with the Hereward Way footpath for a short moment before meandering beside the River Ouse and back through Ely’s market square. At about three miles, it’s an acceptable distance to traverse when the temperatures drop.

With camera in hand, I emerged into the blinding morning sunshine. The satisfying crunch of snow beneath my boots reminded me it had been a long while since I’d enjoyed a leisurely walk in the snow. I slowed my pace out of respect for the occasion.

Walking at a slight southeasterly direction, I neared the Roswell Pits. Located on the outskirts of Ely, the pits were the site of clay excavations for flood and bank repair in the 17th century. In 1984, the area was designated a Site of Special Scientific Interest for geological importance. It’s now a nesting and breeding ground for birds like the common tern, and great crested grebe and kingfishers can also be spotted in the area.

While the bird watching is interesting, the draw for me is being able to catch a glimpse of Ely Cathedral, aptly named “Ship of the Fens,” emerging from the horizon.

Crossing the train tracks, the footpath leads me to a stretch of road where, in the autumn, I gathered about two pounds worth of blackberries. It’s a short stretch of tarmac before veering off to the right toward the river. My anticipation was building at seeing the riverbank with a fresh dusting of snow. 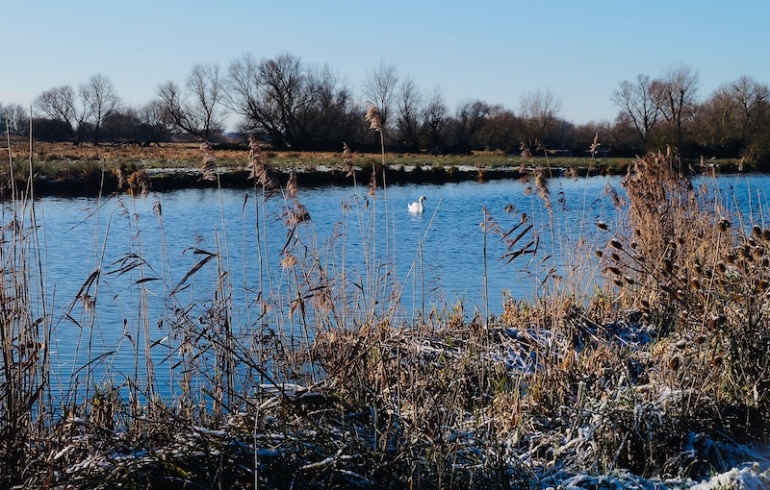 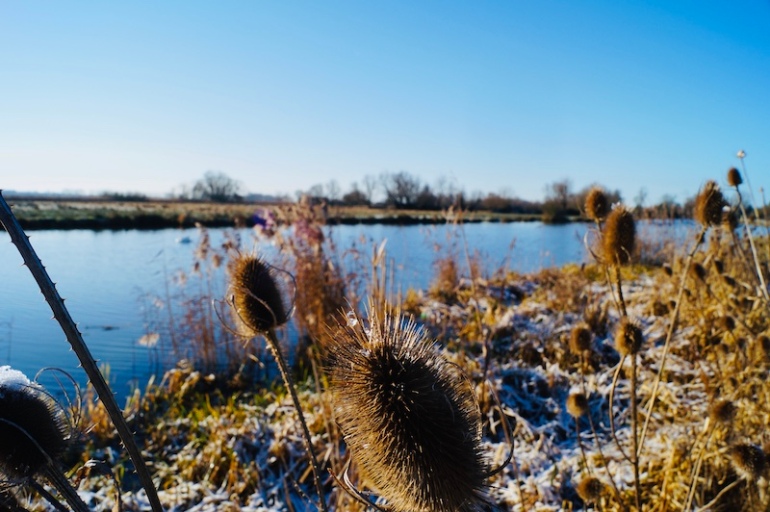 Tiny clumps of ice and snow clung to the prickly teasel plants, but it wouldn’t for long. I could hear the crackling and trickling of water as the sun began melting the layer of white.

The pair of swans that frequent this stretch of river were lazily preening and oiling their feathers. They drifted with the current while nuzzling their strong bills into their bodies. The cold had made everything sluggish. Even a tiny sparrow flitting among the reeds seemed content to hop just a few feet ahead of me as I approached, rather than take flight. 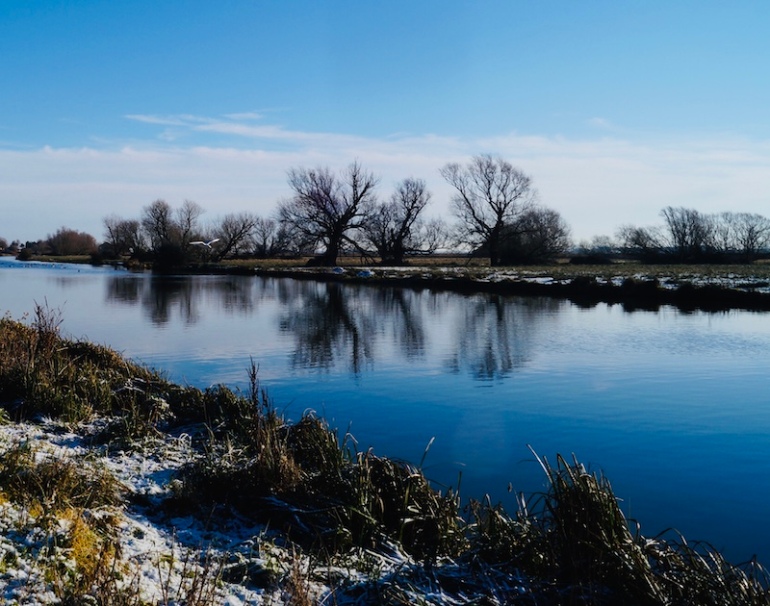 To walk at a slow meander, for the pure pleasure of crunching in the snow and watching a river current, is a gift that deserves my gratitude. It was a winter stroll that was without much fanfare, but not all walks and experiences need glitter and a sense of accomplishment. Rebecca Solnit says it best in her article “On a Childhood of Reading and Wandering:”

“Most of our pleasures—the personal ones of love and friendship, the animal embodiment of everyday activities like walking, the impersonal visual and spatial splendors of form, of scale, of color, and texture, are utterly ordinary, except when they’re not available at all.”